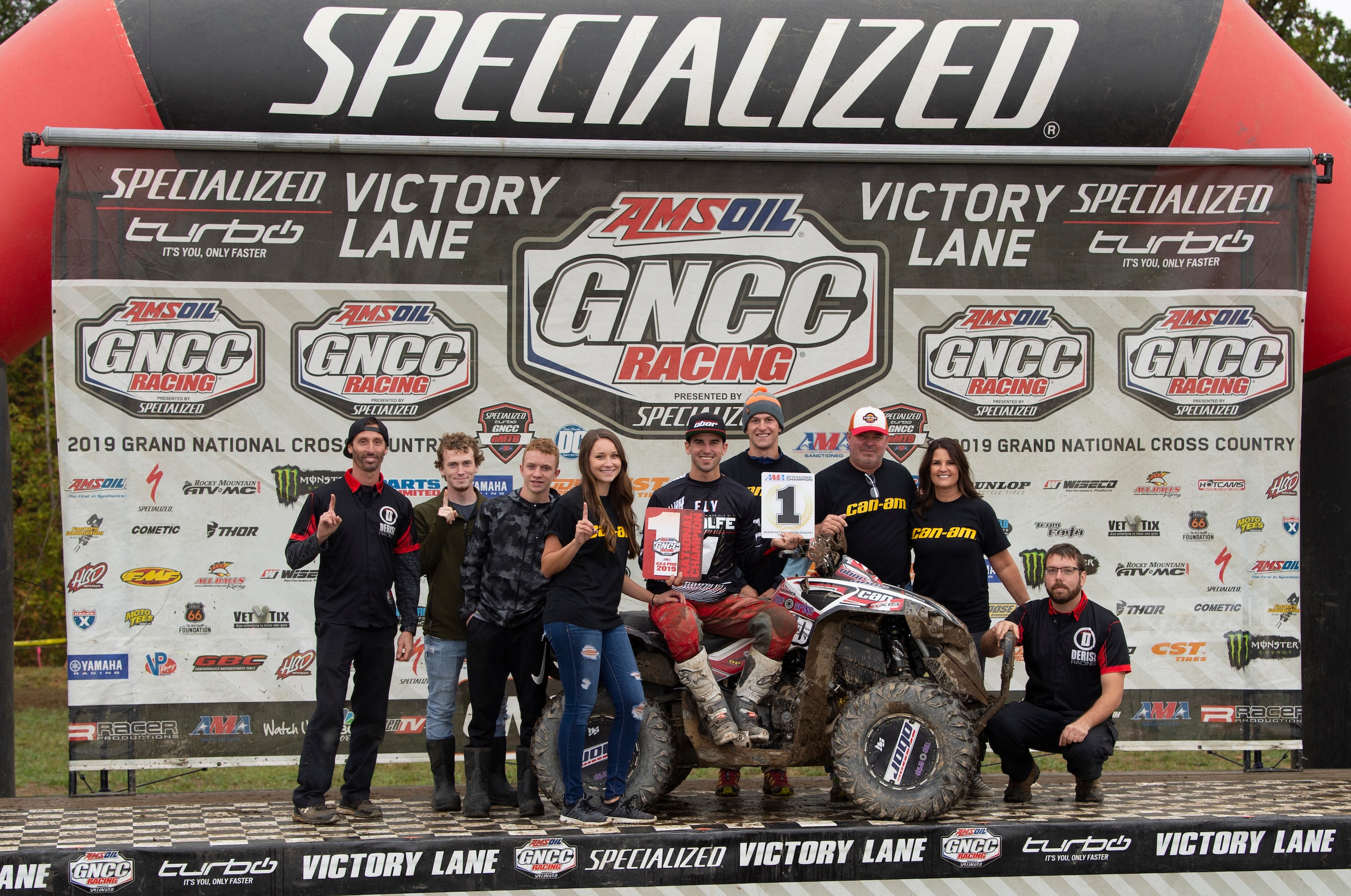 Landon Wolfe spent much of his teen years honing his off-road racing skills within the Grand National Cross Country series. Wolfe, 25, just recently secured his third GNCC racing championship of his career, capturing the 2019 4x4 Pro ATV class title. The Glenville, Penn., racer earned his first GNCC podium 10 years ago with a third-place finish in the First Year Racer racing on two wheels. His first series title came one year later when he switched to four wheels and took home the 16-19 C ATV class title. Wolfe moved up to the College B class 16-21 ATV division the following season and again took home a championship.

Since that time, Wolfe has competed with both four-wheelers and bikes (both combustion and most recently an electric mountain bike this year) with great success in the Pro-Am and Pro ATV ranks. But it was when he signed with Can-Am in 2017 to compete in the 4x4 Pro ATV class in 2018 aboard a Renegade X xc 1000R when things started trending toward upwards again. In fact, his 2019 4x4 Pro ATV class championship has not only gained him more GNCC street cred, but it has also aligned him with a long list of prior Can-Am 4x4 champions. It’s a remarkable group of title holders to join. Riders who have put the Can-Am brand atop the most prestigious GNCC 4x4 podiums since 2005. Wolfe has etched his name in the GNCC history books amongst 4x4 greats such as Buckhannon, Beasley and Cunningham, to name a few. 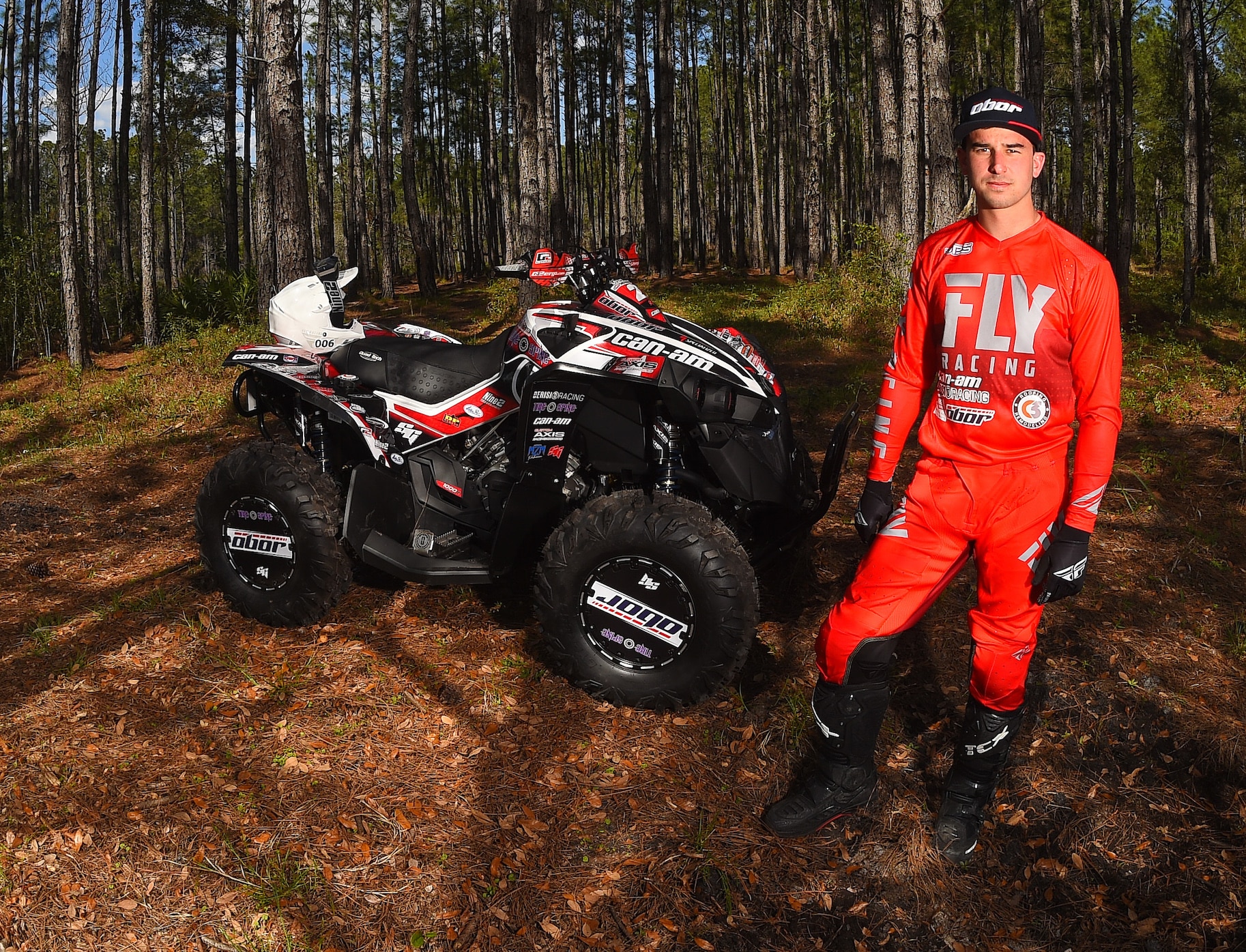 Q: How / why did you start racing?
A: My father, Michael, has always been involved with some sort of racing since before I was born. Once I was old enough, I started racing all different sorts of things and was hooked on the racing mentality immediately. After years of racing many different vehicles with wheels we eventually started to concentrate strictly on four wheelers and that has brought us to now.

Why GNCC vs. other series?
GNCC is the elite off-road series for the states and it happens to also be on the east coast which is where I am from. I started racing motocross but didn't like all the stop and go and waiting to ride at the racetrack. So, I made the switch over to local hare scramble racing and eventually made my way to the big leagues (GNCC).

Advantages to racing both two wheels and four wheels on the same course or in general?
I actually raced dirt bikes long before I was racing four wheelers. In 2008 I suffered a knee injury that put me out for a long while and during rehab I started to ride four wheelers a bit because it wasn't quite as dangerous with a bum knee. But I still enjoy riding dirt bikes a lot and try to take the chance to do so whenever I can. Although I do think riding dirt bikes can help with my ATV skills as far as throttle control and just having handlebars in my hands, its more just to help spice things up for practicing and always keeping the sport interesting for me.

How has the Can-Am factory support changed your approach and career?
Can-Am has been a tremendous help to my entire racing career. It really was a dream come true when I got the call from Can-Am in 2017 to join their team. My racing career was close to coming to an end a couple years ago because of lack of support so it has been a huge blessing to have factory support from a company as great as Can-Am to keep this racing career alive.

What makes the Can-Am Renegade 4x4 such a great vehicle for GNCC racing? How would you sell it to an interested buyer for example?
The renegade is the ultimate machine for GNCC and I think its results show that plain as day. It truly is incredible how such a large and heavy machine can handle as good as it does at the speeds we're traveling through the woods. I have gotten a chance to ride both the 1000 and the 850 and the power on both of them is awesome. Although we use some aftermarket parts to suit our needs, the quads really are race ready straight from the dealership. Can-Am has built an amazing machine.

How did racing a sport quad in GNCC prior to switching to 4x4 assist you with your growth as a 4x4 racer?
Sport quad racing and 4x4 racing are very different kinds of racing on many different levels but some things do transfer over pretty seamlessly. The handling and power of the quads are 100% different but the biggest difference I struggled with getting comfortable with was the 4 wheel drive and the power steering. The speeds on the sport quads was a bit higher through the tight woods so I think the biggest advantage I had transferring over to 4x4 was I was more used to the higher speeds through the trees. At the end of the day they are both four wheelers though so all of my experience on sport quads did not go to waste.

Since you've competed at the Pro level in the morning and afternoon, I'd have to believe you have earned the respect of your racing peers, no?
I hope so!!! (laughing) It is definitely different for somebody to switch between afternoon and morning pro classes, so I know it was talked about a lot. I do know some people who have rode a 4x4 after riding sport quads that have absolutely loved it. But I also know some people who have tried it and said it is absolutely not for them. It just all depends on what suits you.

Who serves as your mechanic?
James Reeves from DeRisi Racing is my full time race bike mechanic. James is a mastermind of a mechanic and preps me a perfect race ready machine each and every race. James is most definitely one of the biggest assets to my team and I owe a lot of my accomplishments to him.

Who has had the biggest impact on your racing efforts?
My father has had the biggest impact on my racing career. We have been racing a long time and in the long time there have been some hard times and he has definitely pushed me through all of those times. He is there to celebrate when we do good and there to lecture just enough to get me going when we do bad. But my entire family has been great through my whole racing career. My Mom (Melanie), Dad, and sister (Rachel) were there for me throughout the beginning of all of this and now my wonderful wife, Danielle, has been added onto the team a couple years ago and is all about the racing life as well.

Biggest tip for wannabee GNCC ATV racers?
I know everyone answers this question with the standard ‘just make sure you're having fun’ but it is totally true and is a huge tip. But to spice things up I would say consistency has been a huge part of my success. Race seasons are long and grueling and it’s not always the fastest guy who wins, so I try to always stay consistent and everything seems to fall into place pretty well.

Toughest 4x4 challenge thus far?
Early on when I started racing the 4x4's we struggled a bit to find out what parts and pieces I was abusing too much and what we needed to replace/service in between races. Those struggles really seemed to set us back early on in our first year, but we overcame that fairly quickly. And then of course just trying to get comfortable on such a different machine was tough but I have seemed to adapt to it pretty well and love racing them. But as far as challenging the 4x4...there's not much that challenges the Can-Am Renegade.

Describe your feelings after winning the title?
It really has been great. I could not be happier to be able to put together such a great year and end up on top against some great competition. But more than anything, I am so happy to succeed for everyone who helps me.

Name your dream race you've always wanted to do?
Tough question. I always thought it would be awesome to run Baja, but I really don't know enough about the race to go do it without someone that has experience with being there before, so maybe one of these years. But here recently I thought it would be cool to go to 'Hunt the Wolf' or any kind of race like that.

How is it for you to put your name amongst some of the greatest 4x4 champs in the sport?
Very cool! There have been some extremely talented people who have won championships in this class before, so it is cool to be added to the list.

Anyone you'd like to thank, like sponsors, family and others?
Forever thankful to all that have helped over the years. Mom, Dad, Danielle, James Reeves, Jojo, Rachel, Jon, Can-Am, OBOR, and DeRisi Racing

What do you eat prior to the morning race and then after?
I'm usually not too picky about what I eat but its normally an egg sandwich for breakfast and then half of a PB&J before the race.

Do you train to stay fit or is riding/racing your fitness?
I train as much as I can but not full time. I do some workouts here and there but it's mainly just some sort of cycling. I don't get to ride much at all between races and when I do ride its usually on a dirt bike.