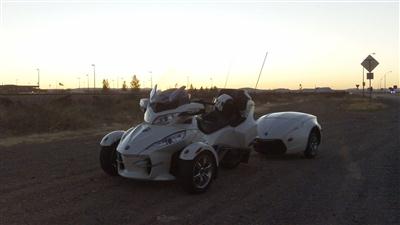 Once More Into The Breach!

On March 7th I will launch on my annual cross-country trek from California to Florida and back, to attend Daytona Bike Week. This will be, I believe, the 17th time I have made this ride in the past 22 years, on a combination of 15 different makes and models of bikes. Last year was the first time I ever repeated on the same kind of machine, that being the Can-Am® Spyder® RT, and this year I will make that a “three-peat.” The reasons are fairly obvious, but yet may not be what you think.

Yes, it is true that BRP supplies me with the vehicle, free of charge, and that’s a big incentive for riding the Spyder. But it is just as true that every other major manufacturer would and has done the same for me in years past. That’s just one of the perks of being a professional moto-journalist. So why choose the Spyder? Well for starters, early March is simply not a great time to be riding across the North American continent. In past years I have encountered ice, sleet, snow, high winds, flash floods, tornadoes, sandstorms and even a hurricane on my way to and from Florida. More than once I have had to hole up in a cheap motel somewhere to let the bad weather pass, but the odds of that happening while I am onboard the Spyder are greatly reduced. The added security of the three-wheeled stance, coupled with ABS and the Vehicle Stability System, not to mention truly great weather protection, means that in most cases bad weather barely slows me down at all. Only once, when flash floods wiped out the roadway, did I ever have to halt my forward progress on the Spyder. 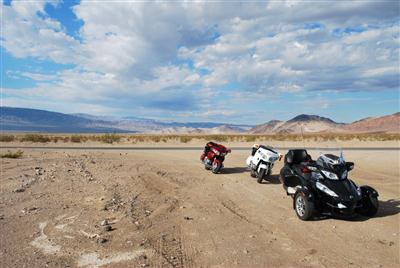 Though I often ride all alone, I really like having a friend or two along. Not just for the company, but for the security of knowing there is someone there to help if something goes wrong.

And then there is the comfort factor provided by the adjustable windshield, upright seating position, power steering, cruise control and a great saddle. Together with added amenities like the stereo and GPS, it all adds up to a much more relaxed and stress-free ride, which simply means I can ride much longer and farther each day than I would want to on a two-wheeler. And with the RT-622 trailer behind me, I can carry anything I want along on the trip, instead of having to make hard choices of what to take and what to leave behind.

Put it all together, and it is simply no contest. Of all the machines I have toured on over the years, the Spyder has to be my number-one choice for a long distance ride like this. 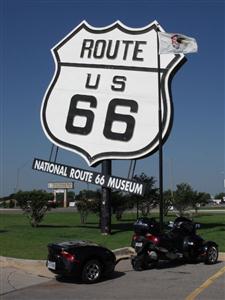 Don’t get locked into just whizzing down the Interstate. Explore the back roads and see some of the history of this great country.

Routing It
Generally I tend to avoid Interstate highways unless I simply need to make time. I much prefer the slower pace and more interesting sights to be found on the back roads of America. To me, that’s what touring is all about. Unfortunately, getting from Southern California to Florida doesn’t lend itself well to that kind of riding. A simple look at a map of our country will show you why. The most direct route is virtually all interstate. Detouring to the south is out of the question, as for half the route I will be running near the Mexican border, and for the other half, the Gulf of Mexico. Not too many options there. There are a lot more options with a more northerly route, but remember that this journey takes place in early March. I have tried using a more northerly route twice during this time of year, out of sheer boredom and frustration, and both times got myself mired in snowstorms, icy roads and wind chill factors well below zero. So with only a few exceptions of a couple of hundred miles here and there, this is one trip where I have to bite the bullet and ride the big highways with all the semi-trucks, tourists and spring-breakers. Luckily for me, the big Spyder RT eats long miles at high speeds as well as anything I’ve ever ridden.

Still, there are tricks I can play with the route to ease the boredom and increase the fun factor. Checking maps and GPS files, you can often find state or county roads that parallel the interstate for anywhere from a few miles to a few hundred. A good case in point would be US190 from Beaumont, Texas, to Baton Rouge, Louisiana. This road parallels I-10 for about 160 miles without taking me more than about 20 or 30 miles off my route, while getting me away from the traffic and tedium of the Interstate. It also means great options for finding small-town restaurants, instead of having to eat at the interminable chain eateries found on the main highways, not to mention often finding interesting little sights and meeting friendly people. Trust me, the gal behind the register at the truck stop on the interstate just wants you to pay up and get out of the way for the next customer, but ride up to a little two-pumper on Main Street in the rural town of Elton, Louisiana, and you will not only get engaged in conversation with the cashier, but probably two or three locals as well. Heck, I’ve even been invited over to some folks’ houses for lunch! Rural America is still a great place, and it’s a shame that most people never experience it, as they whiz by on the interstate 20 or 30 miles away. 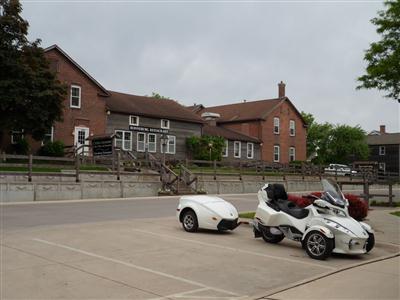 No chain restaurants for me. I really like finding little joints like
this one in Amargosa, not far from Death Valley, where the two ladies who own the place make some of the best homemade pie you ever ate.