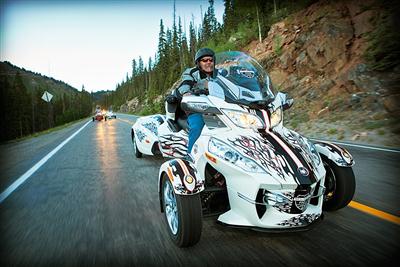 Many Can-Am® Spyder® owners in North America – and even worldwide – know the place to go to get answers about their Spyder. You name the question, and chances are it’s been asked and responded to by a number of helpful people on SpyderLovers, the user board created by fellow Spyder Five ambassador Lamont Bryden. In the final week of 2012, the popular Spyder-specific user board reached the 10,000-member mark. I interviewed Lamonster about his site and the recent milestone.

Faran: When did you start SpyderLovers and why?

Lamont: The Spyder was like pretty much anything else I get into. I look for all the information I can find on the product, and if it happens to be a motorcycle I like (or in this case a “roadster”) with no good forums out there, I create one. I’ve been building motorcycle club forums for the last 13 years now. It all started with the Honda Valkyrie and has grown from there. Currently, I run seven motorsports websites with over 160,000 members.

When looking for Spyder forums, I didn’t find any that were Spyder-only, so I started SpyderLovers.com back in August of 2007. I didn’t even have my hands on one until December of 2007. I put my deposit on one in July of that year, sight unseen.

Faran: Compared to your other boards, is there anything unique about the members of SpyderLovers?

Lamont: SpyderLovers is as unique and diverse as the Spyder. We have owners in their 20s, owners in their 80s, and pretty much everywhere in between. On my other boards, the age range does not span that wide.

We have a lot more lady riders and new riders like you. The Spyder’s three wheels have eliminated the one fear many new riders have – falling over. And I think the option of having a transmission without a clutch lever has eliminated another fear some new riders have. You still shift as you would any other bike, but it’s done with a paddle on the bars instead of your foot. The clutch lever with foot shift is still an option for those who like it, but having owned both I prefer the SE over the SM transmission.

Because the Spyder is not a motorcycle, there are more members on this board who are not “motorcycle people,” so a lot of this stuff is brand new to them. All my other boards are bikers with a new bike trying to get information about their new bike. 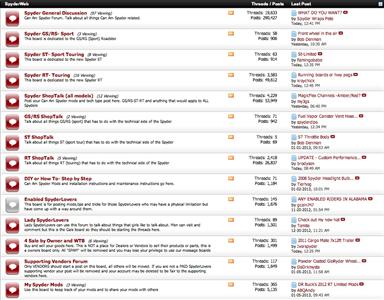 Faran: If I’m thinking of buying a Spyder, what kind of information can I find on Spyderlovers?

Lamont: The thing about SpyderLovers is that the people are eager to help. If you’re looking to buy a Spyder, I think the only thing that’s better than being on our board is taking a test drive. I really I think the two should go hand in hand. The site is going to give you the good, the bad, and the ugly about the Spyder, and that’s what you really want when you’re seriously thinking about dropping this kind of coin down. Like any product, it has had a few issues, but I’ve watched as BRP has worked through all of them.

There’s a reason the club has grown to 10,000 members and the events keep getting bigger, and that’s because BRP has a great product that’s taken off in poor economic times. Back in the good ol’ days when I started doing this, pretty much any Joe could slap a bike together and make a go of it. But times got tough, and BRP brought out something new to the world of motorsports at pretty much the worst time in the industry. BRP not only made it, but they sucked in hardcore bike guys like me and at the same time opened the door to new riders who had wanted to ride but never found the right bike. The Spyder has become that ride for many.

Faran: What do you think is the most common question asked on SpyderLovers?

Faran: I definitely learned that one early on! So what’s the strangest question you’ve ever seen posted?

Lamont: That’s a hard one, I do remember a guy posting how stupid he thought it was to have to pull out the safety card and read it every time before he started the Spyder. Now it does say that on the scrolling message, but I never thought that anyone would actually do it. I asked if he was kidding and I guess he wasn’t. The post was deleted soon after that.

There’s even a thread on SpyderLovers called “The dumbest Spyder question yet” with lots of questions people get asked about their Spyder.

Faran: So if I already own a Spyder, why would you suggest I join SpyderLovers?

Lamont: SpyderLovers is the number one information hub for all things Spyder and I can say that without reserve. Seemingly every situation has been posted on SL, and most of the time it’s seen on our boards before it shows up at the dealers or before it’s brought to BRP’s attention. Many times we, the members, are the ones who solve the problem, although sometimes it’s not a problem at all; it’s just something a new owner hasn’t learned yet that’s unique to the Spyder.

Another reason to visit SL as an owner is the great list of aftermarket vendors and dealer support we’ve developed through the years. If there’s a product for the Spyder, you can bet one of our board sponsors has it or makes it. Members who have installed and used these products are happy to give you their reviews and many times the vendors themselves will interact with the customer on the board. It’s not always good, but it’s always real.

I think the most important reason to be on our board if you’re an owner is the fellowship with like-minded folks. We are Spyder lovers. We are passionate about our rides and you can see it and feel it in the pictures we post and the blogs we write. It won’t take long to see that once you start reading the boards. We have a great group of techs, veteran riders, and folks who just like to have a good time. When we do meet at the different Spyder events, it’s like a family reunion, even though most of them have never met face to face.

Faran: Can I find people in my area to meet and ride with?

Lamont: We have chapter sites setup for every state, and we have User Groups where you can create and promote your own riding group on our board. The MOGang is a great example of a good riding group. They are the worker bees behind Spyderfest. If you don’t know what Spyderfest is, you can go to SL and read all about it. In short, it’s the largest grassroots owners event for Spyder, and it was started by users/owners on the site.

Faran: Is there anything else you’d like people to know about SpyderLovers?

Lamont: I would say if you are thinking about Spyder ownership at all or you just want to know more about the Spyder, you need to stop by SpyderLovers.com and take a look around. Grab a cold drink and a snack, because you’re going to be there a while. 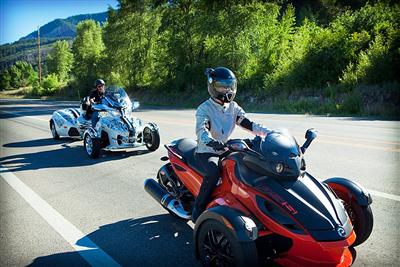