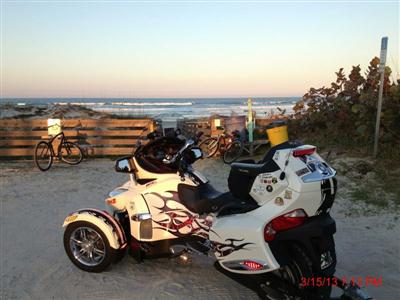 Living in eastern Tennessee, you really don't know what to expect from winter, and this year was a cold and wet one with quite a bit of snow mixed in. I always look forward to Daytona Bike Week, as it is the kickoff for the riding season for most of us on the east coast. You have to understand that I moved to eastern Tennessee in 2002 from San Diego, and we pretty much rode year round there. When I moved here, I had never seen or been restricted by the seasons before. But I wouldn’t trade living here for anything. The only season we had in San Diego was Fire Season.

From where I live in Mosheim to Daytona Beach, the trip is right at 600 miles, and for me that's a perfect day’s ride on the Spyder. The Spyder is so comfortable to ride that even after a 600-mile day, I'm still up for another ride or whatever the rest of the day might bring. The only bad part about this ride was that it was 36 degrees with a light rain – just light enough that I didn't think I needed to wear my rain gear, but I really should have. I got wet and cold coming over the mountains, and it took about 200 miles or so to warm back up again after gearing up. I did leave a day sooner than I had planned, and I'm glad I did, because it snowed at my place. I would have had to come over the mountains in the snow, and that's not much fun.

I got there Tuesday around 4pm, and the first thing I wanted to do even before checking in was to find a carwash and blast off some of that road grime. I hate a dirty bike, and anyone who knows me knows that's my first stop on any trip. You only get one shot at a first impression, and I want mine to be a clean one.

The next day before going to the Spyder tent, I decided to hit a couple of vendor friends and see how they were doing. My first stop was to see Dave at Custom Dynamics. Dave makes some great aftermarket lighting for the Spyder, and my Spyder is equipped with just about everything he sells.

From there I headed on over to the Spyder tent. They were getting ready to load up a new batch of riders for the demo. Bill, who drives the truck and leads the rides, said they had a really good turnout and that the rides were pretty much all booked for the day. His rig was looking good!One of the first guys I ran into was Chris on his 2013 Can-Am® Spyder® RT with trailer. He had the trailer from his 2010 RT and had it painted to match. It really looked great.

I spent most of the day talking with members of SpyderLovers and chatting it up with folks that either had just taken a test drive or were about to. All the feedback I heard was very positive. One thing I did notice this year that was not the case in previous years was that pretty much everyone I talked to knew someone who owned a Spyder, and the same comment was repeated over and over: "They love it!" Before folks would just say something like “we've seen them going down the road” or “we saw a commercial for them.” This year you could tell the Spyder was getting a foothold, and folks were taking notice.

Later that day, I was talking with some folks and a guy walked up to me and asked if I remembered him. I didn't – but that's because my memory is shot. But after we talked a bit, I did remember him and his club from the Virgin Islands. Two years earlier, we had stayed at the same hotel, and one of his buddies had a custom M109R that I really liked because I have the same bike. They were all on bikes, except Michael. He was on a pretty-much-stock red and black Can-Am® Spyder® RS. He’d bought an IPS from me for his key, and he was back for another one and because he wanted to show me what his Spyder looked like now.

I was totally blown away by the work he had put into this Spyder. The build took him six months and a ton of cash I'm sure. This had major custom glasswork, air all the way around so he could drop in on the ground, 360 rear tire with jackshaft, and a custom stereo system that would blow your doors off. He had just came back from winning a trike show. I talked to him later that week, and he had won three shows, including a first place at The Rat’s Hole. That's a big deal, since the best of the best show up for that show. 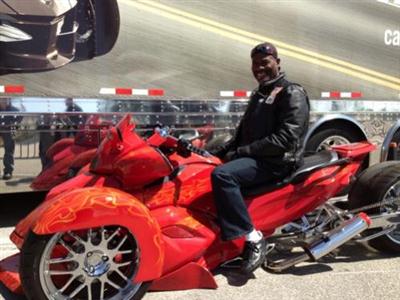 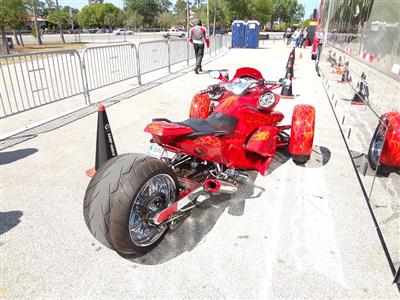 On Friday night, we hung out at the Hess gas station. You need to get there early to get a parking spot, but it's like the bike show comes to you when you're there. You'll see some of the wildest bikes in Daytona and hear some unreal sound systems. I wish there was some way to post that but it would never come out as good as it sounds in person. Some of these guys have $10K just in electronics on their bikes. You'll also see some real characters along with some wild rat bikes.There were two crazy tall trucks too. I saw the guys slide out of them but I never saw them get in. Sorry I missed that part. 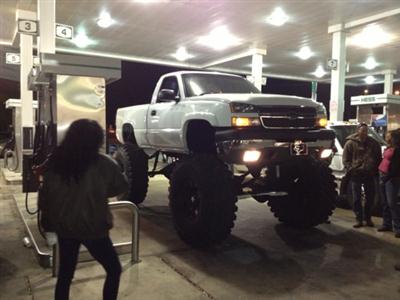 Saturday was the big day. After breakfast Fred, Harvey, and myself headed over to Ormond Beach to meet up with Mike Corbin. We were the only ones there, so we had a nice little chat about the things that gearheads talk about. Fred hadn't seen Mike in like 25 years, so it was good for them to do some catching up. Mike is a very interesting guy to chat with. He's about the only guy I know that's been doing this longer than Fred Rau. 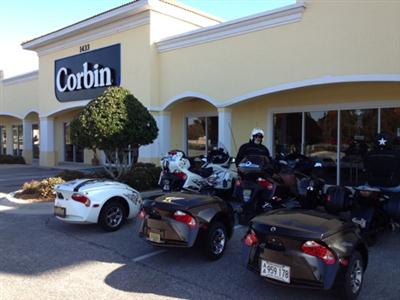 We split off with Fred at Corbin, and then Harvey and I headed over to see Des from Ultimate Seats. Unfortunately, he was set up at the race track so we didn't get a chance to talk to him.From there we headed back to the Race Track and got ready for the owners welcome party put on by BRP. They had a tent, great food set up for us, a little music, and a live broadcast of the races that we could watch. We had a good turnout, and the weather was great. 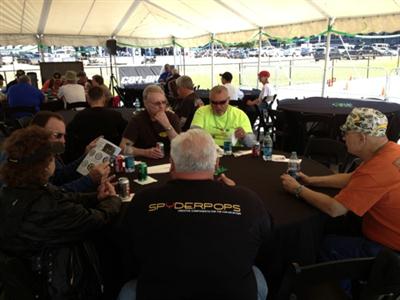 It was another great trip. It’s always great reuniting with old friends and meeting new ones. I really hoped that when I got home this would be the start of warm weather, but it looks like the forecast is calling for more snow. So I guess it will be a while before the warm weather takes hold. I'm glad I got a taste of things to come, and I'm glad I have another Daytona Spyder pin to add to my collection.