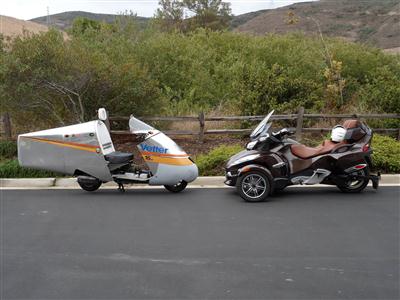 Recently, while attending the annual Classic Bike Show in San Luis Obispo, I met up with an old friend, Craig Vetter, who was serving as Grand Marshal for the event. Some of you might recognize him as the man who was recently honored on the cover of American Motorcyclist magazine.

This legendary inventor/designer of the Vetter Fairing, and Member of the AMA Motorcycling Hall Of Fame, has often been referred to as “The Father of the Modern Touring Motorcycle" for his groundbreaking work that has influenced the design of practically every modern motorcycle on the planet in one way or another. 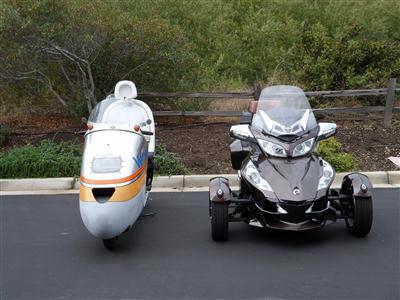 Another shot of the Vetter and RT

Besides serving as Grand Marshal for the weekend, Craig was showing off his latest project — a highly-modified streamliner built on a Honda Helix platform, that gets about 100 miles to the gallon of fuel. I was there to see and ride the Streamliner, but when Craig saw my Spyder he quickly remarked, “So, we were going to switch bikes for this ride, right? I’ve been dying to try one of these things!”

Naturally I agreed, and when we got back to town I asked if he would mind if I switched on my video camera to capture his remarks. He agreed, and I must admit I was somewhat surprised to learn how much he liked the Spyder, considering that his life’s work has involved designing less-complex, practical and fuel-efficient vehicles. But it seems that as a designer and engineer, Craig was righteously impressed with the Spyder, and didn’t mind saying so. 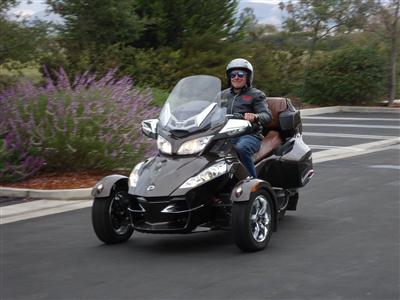 Can you tell he had fun?