ROADSIDE ON THE ROADSTER: SPYDER RIDING THE ORANGE COUNTY CANYONS

Since I moved to Orange County last summer I've been up to Malibu a few times, to ride through the canyons on Mulholland Highway, and visit iconic spots like Neptune's Net and The Rock Store. Until this past week, I had no idea that I didn't need to ride more than an hour up the freeway (or more, with traffic) for that kind of fun. I've got stunning canyon runs and cool places to visit right in my own backyard, here in the Santa Ana Mountains.

On Memorial Day, my girlfriend Julie and I set off to explore the mountains on the Spyder roadster, and on foot with some hiking. While researching the best hikes in the Orange County, I came across a couple of posts about Cook's Corner, one of Southern California's most popular biker bars, right on the corner of Santiago Canyon and Live Oak Canyon roads, on the way to our hiking spot.

It's been around since 1926, but it didn't become a Mecca for chromed-out bad boys and leather-clad rocket racers until much later. By the time we hit the scene around noon the parking lot was jam packed with bikes, easily a couple hundred. In fact, it was so busy that we decided to bypass it and head on to the hike. We circled around a couple of times to get a look at the beautiful works of moveable art, and I made a secret plan to stop back later that week to sample the cold drinks and classic roadhouse style menu, and listen to live music in the outdoor patio. 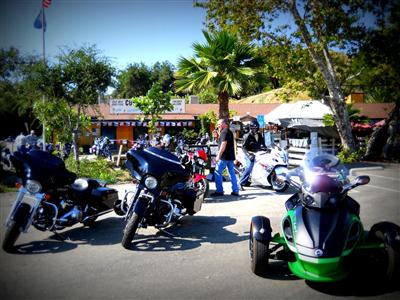 Julie and I rode out on through Trabuco Canyon, and about a mile after Cook's Corner the landscape shifted. For a good three or four miles the road was covered over in a canopy of trees, with the sunlight shining through the leaves, casting a kaleidoscope of shadows on the ground. It was stunning. What made it even better was the fact that it got pretty twisty, though the 35-mph speed limit and heavy holiday presence of the Highway Patrol kept me from getting too throttle happy.

A few miles in, we came across the Trabuco General Store, your last outpost before you head up and over the mountain. It's a fun and funky little place that’s been around forever as well. Inside, they have all the snacks and drinks you'll need for a ride or a hike, and a seating area made up of an old bench and what look like ancient barber's or dentist's chairs. Since it wasn't nearly as crowded as Cook's it was the perfect place to stop in for a soda on the way out to our hiking destination, The Holy Jim Trail. 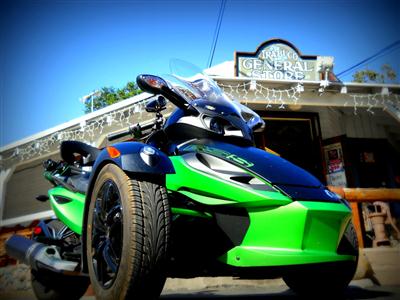 A half-mile or so past the general store, we turned off onto a dirt road to make the 4.7 mile ride to the Holy Jim trailhead. We encountered a bit of a problem 2.7 miles in when the dirt road got really uneven, with deep ruts and large chunks of rock, way too much for the Spyder's low-hugging stance to handle. But, we didn't come all that way for nothing, so we parked the Spyder and walked two miles to the trailhead. That's right. We hiked two miles (four round trip miles) just to go hiking. When we finally reached the Holy Jim trail, we did about a mile and a half and turned around. We figured a seven mile round trip walk earned us some Memorial Day celebrating, and we were ready to get back for dinner. 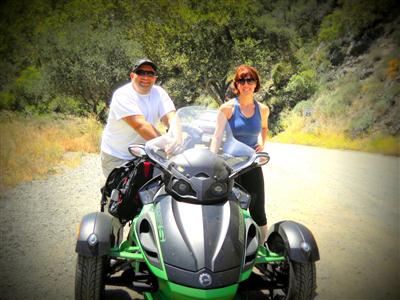 Julie and I before our hike

A few days later my friend Joshua Kobak rode into town on his beast of a BMW. He's starring in AMERICAN IDIOT, the Green Day musical that's touring the country right now, and was setting up shop down the street from me at The Segerstrom in Costa Mesa. Josh and I have been friends for over 20 years; in fact he was the very first friend I made on my very first day of my freshman year of college. We've been co-writers, co-directors, fellow actors, roommates and since that first day, brothers. We've also both been avid motorcyclists for the last fifteen years, but until this past Thursday we'd never had motorcycles in the same place at the same time. When he called Thursday morning to see about taking a ride that day I knew I had to show him my new favorite playground.

But, first…lunch. One of my favorite places to hang out in Orange County is Old Town Orange, just off Chapman, the road that leads out to Santiago Canyon Road. On the edge, right next to Chapman University you'll find a little stand called Bruxie, a sandwich shop that swaps out the boring old bread for thin Belgian waffles. Their biggest seller is a waffle sandwich that features a fried chicken cutlet with a mound of vinegar slaw and drizzled with honey (I always hit mine with a little Sriracha). They have desert waffles too, but there's something already so shameful about wrapping up a piece of fried chicken in a waffle that I've never tried anything else. I just wouldn't respect myself in the morning. 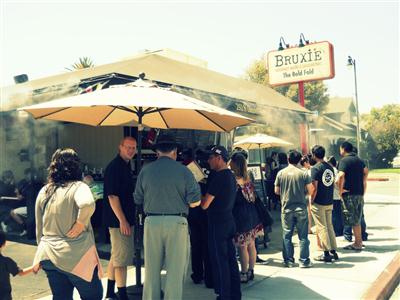 Bruxie was busy as usual 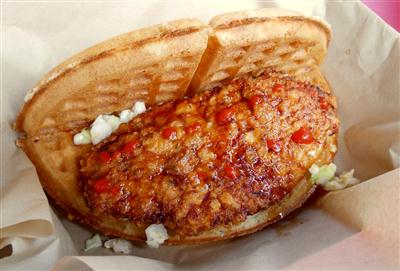 Since it was a Thursday afternoon, we had the canyon to ourselves for most of the ride. The Memorial Day riders were gone, the heavy traffic from Irvine Lake had disappeared and we were free to thunder through the mountains on our own. We had an absolute blast, and the scenery was spectacular.


On the way back we veered off into Modjeska Canyon to see the wildlife sanctuary. While we were there we ran into two ladies on bikes, one of whom asked how I liked riding the Spyder. I told her how much I loved it, and we eventually got around to me telling her I was an ambassador. Then, she told me her job was editing two motorcycle magazine websites, www.allaboutbikes.com and www.ladymoto.com. Her name is Jan Plessner, and we hit it off right from the get go. She's scheduled to test ride the Spyder later this month, and I'm guessing she's going to love it. 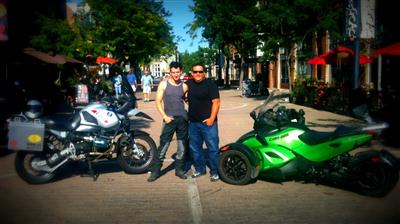 My best friend Josh and I

Truth be told, I still hadn't had enough, so Saturday afternoon I saddled up again and took another ride out to the canyons, to Cook's Corner, the General Store and other parts of the area. I absolutely see why Fred Rau put down roots out here. With all this buried treasure in your own backyard it's hard to imagine living anywhere else if you're a rider.