My friend Brian Hoffman was on the West Coast last week, celebrating his birthday and catching up with old friends. I say "friend" but he's close enough to be a brother. We met when I went to sell merchandise on the national tour of Annie, a job I took so I could travel the country with my girlfriend. Brian was the "Dog Boy," which meant that he took care of the dog that played Sandy and her understudy (yes, dogs have understudies!). Rather than fly two oversized canines from city to city, the company bought a van, and for two and a half years, Brian crisscrossed the country with the dogs in tow, logging thousands upon thousands of miles.

Shortly after I joined the tour, I started riding shotgun and helping out with the drive. We were fast friends right away, compatible on every level. We loved the same comic books, music, movies, and TV shows. We loved trying new things (particularly food), and we shared a deep appreciation for the road. We formed one of those fortunate friendships where it seems that no matter how long you go without speaking or hanging out, when you see each other again, it's like you pick up right where you left off. So, when I heard he was coming to California, I jumped at the chance to hang out with him.

He had one request: "I want to ride a Spyder™."

Early Wednesday, his birthday, we headed over to my parking garage, and I took both Spyders up to the roof. It was largely empty, except for a couple of parked cars, and it gave Brian a perfect track to practice turning and speeding up on the straightaways. I spent about five minutes going over the basics, the same as I had done when teaching Julie a few weeks before. Once I get them acquainted with turning it on, hitting the mode button, etc, I try to stress that for their first couple of laps, all they really have to worry about is throttle and brake. He did a couple of laps, picking up speed each time, and practicing leaning into the turn. The third lap, I taught him to shift and got him practicing shifting up to second on the straightaways.

Ten minutes later, we were ready for the streets. My neighborhood in downtown Santa Ana is busy, but there are a lot of stoplights and side streets, so getting him comfortable on the road was pretty easy. I stayed close in front of him and kept my speed down, giving him a chance to practice shifting gears and coming to a stop. On our way to lunch, we finally hit a long stretch where the speed limit was 45 MPH, so he was able to pick up the speed a bit. The Spyder is so intuitive that I feel like beginning ryders can pick it up much more quickly than a motorcycle. The learning curve isn't all that steep, which means you can be comfortable and having a blast in no time.

When we stopped for lunch, I asked how he was enjoying it so far. He said he was loving every minute of it. "I feel like such a rock star. I can see when I come to a stoplight, everybody's looking at me." We stopped twice – once for gas and once at the waffle sandwich place for lunch. And both times, he got a chance to see what happens when you park a Spyder.

After lunch, I popped the question. "You think you're ready for the freeway?"

He was a tiny bit apprehensive, but there was no way he was going to say no. I told him we'd play it cool, get on the on ramp, and once we were on the freeway, we'd stay to the right unless we absolutely had to move. I wasn't going to go weaving in and out on him, and I didn't want to get him into the carpool lanes, where he'd have to deal with two-wheelers splitting lanes. Within a couple of minutes, we were on and he was riding like a pro. When we finally pulled off, he was smiling ear-to-ear.  I could heard him yelling at me as he pulled up behind at the stop, saying "AWESOME!"

But it was what he said to me once we parked that reminded me that, despite him being a few years younger, there's a chance that we were somehow separated at birth. It was the exact same sentiment I've expressed a hundred times in the past year, and it is my secret thought every time I'm going 70 MPH on the 5. 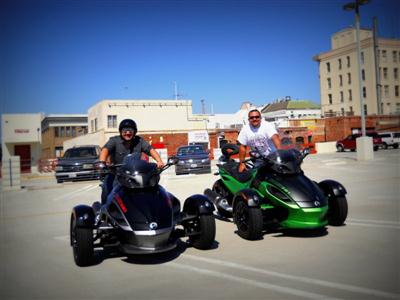 Brian had a great time riding!